Welcome to our blog! We'll be posting all sorts of interesting ads to our blog. Many of these advertisements are highly controversial due to the time-period they were created in. We're sharing these ads because we find them to have historical interest... not because we promote their messages! Please join in the conversation and comment on our blog posts, we'd love to hear your thoughts and insights!
Blog Home
Blog Categories
Recent Posts
Archives 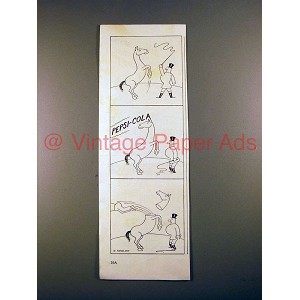 A talented artist can have a profound effect on how a product is portrayed in an advertisement. There are plenty of artists that have contributed substantially to the field of advertising. One such artist was Otto Soglow. His cartoons are easily recognizable and effectively utilize humor as a tool to persuade the consumer to purchase the product advertised. He was did work for large companies such as Nabisco, Martin's Scotch, Royal Gelatin, and even the U.S. Treasury Department. But, my favorite series he did was for Pepsi. Read More...
(0) Comments
Read More

Caterpillar Tractor - There Are No Simple Solutions

Posted by Administrator on 5/18/2012 to Featured Ad Series of the Week
Share |
One of the things I like about old ads is how they often respond to the social and political climate of their time period. There are usually very distinct sides to different topics of debate. If a company picks one side of that debate in their advertising campaign, they run the risk of alienating customers that might be on the other side. Depending on the companies primary audience, this might be an effective strategy. However, I find it very interesting when I find a campaign that is able to effectively target both sides of very complex issues. The ads for the Caterpillar Tractor Co. in the 70's are an excellent example of that. Read More...
(0) Comments
Read More

Posted by Administrator on 5/11/2012 to Featured Ad Series of the Week
Share |
As we head into the summer, I thought it might be nice to feature an advertising series that epitomizes cool, care-free and refreshing. One series that immediately came to mind was Bacardi's series in the 80's featuring Telly Savalas. These ads are all set in warm, inviting tropical locations, where this Greek actor looks quite at home. Read More...
(0) Comments
Read More

Wildlife as Canon Sees It

Posted by Administrator on 5/4/2012 to Featured Ad Series of the Week
Share |
What's the purpose of advertising? I guess when you get right down to it... the main reason for ads is to convince you to buy something. But, that doesn't mean it's the only reason companies advertise. Some might have other secondary goals in mind. One of the campaigns that comes to mind to help illustrate this is Canon's 30-year long Wildlife as Canon Sees it series. These ads have been running since the early 80's (an incredibly long time for any single campaign!) and focus on animals that are endangered species threatened with extinction. Read More!
(0) Comments
Read More
Quick View